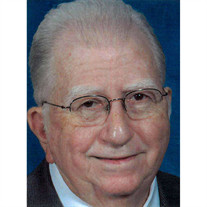 CARRIGAN, J C Age 84 of Nashville. March 10, 2013 passed away on March 10 at Baptist Hospital after a Heart Attack. He was born Nov. 9, 1928, to Jesse Cooper and Myrtle Warren Carrigan. In addition to his parents he was preceded in death by 3 brothers, J.W., Charlie, and Horace; 2 sisters, Louise Osborne and Lillian McKinney; one granddaughter, Madison Abigail Carter. He is survived by his loving wife of 43 years, Mary Hall Carrigan; daughter, Nanci Alice (Jon) Carter; grandson, Zachary Alan Carter; granddaughter, Carrigan Alisa Carter; and several nieces and nephews, who lovingly called him "Uncle Jay."At the age of 13, J.C. was baptized by E.C. McKenzie at 22nd Ave. Church of Christ, and remained faithful to God for 71 years. Over many years of physical adversity he leaned on his favorite scripture, Romans 8:28. After moving to East Nashville he worshipped at the former Joywood Church of Christ, now Trinity Lane. In the two congregations he fulfilled many roles, including supervising Sunday School, driving the bus, coordinating the food pantry, serving communion to shut-ins, and counting the weekly contributions. As a young man J.C. played sandlot ball and kept the scoreboard at the Nashville Vols baseball games; as an adult he played church league softball. He loved Lipscomb baseball, and he and his family traveled for many years all over the country with the team. He began his grocery career delivering groceries on his bicycle and for over 52 years was a clerk, a butcher or a manager for stores all over Nashville, retiring in 1993. He served as a chef in the Army in Bamburg, Germany, during the Korean conflict. The funeral will be held on Wed. March 13 at 10am, at Phillips-Robinson Funeral Home, 2707 Gallatin Pike. Visitation: Tues. March 12, from 3pm to 7pm and one hour prior to service. Burial at Middle TN Veterans Cemetery on McCrory Lane. Eulogists: Brothers Mel Brown, Thomas Snow, and Ray Harris. Congregational singing directed by Brother Greg Dennis. Pall bearers: Lynn Griffith, Roy Austin, Mark Wilson, Greg Osborne, David Osborne, Jeff Carrigan, Marty Hall, and Kerry Wright. Honorary pall bearers: Brother James Dennis, Sr., Billy Haynie, Morris Shockley, and J.P. Malone; elders and deacons of Trinity Lane Church of Christ; Lipscomb University Dept. of Kinesiology, members of former Joywood Church of Christ, and former co-workers at Hunter's Cee Bee. The family thanks Dr. Steven Tai and his staff, and the nurses at Baptist Hospital and Avalon Hospice for their loving care. Also, thanks to Brother John Kelly, Brother Ricky Dixon, and Brother Donnie Rhoten, who helped J.C. on his last day at home. Although J.C. loved flowers, he asked that contributions be made to Lipscomb Academy; Attn: Advancement Office; 3901 Granny White Pike; Nashville, TN 37204-3951, in honor of Zac and Carrigan Carter. PHILLIPS-ROBINSON FUNERAL HOME, (615)262-3312.

CARRIGAN, J C Age 84 of Nashville. March 10, 2013 passed away on March 10 at Baptist Hospital after a Heart Attack. He was born Nov. 9, 1928, to Jesse Cooper and Myrtle Warren Carrigan. In addition to his parents he was preceded in death by... View Obituary & Service Information

The family of J C Carrigan created this Life Tributes page to make it easy to share your memories.

Send flowers to the Carrigan family.