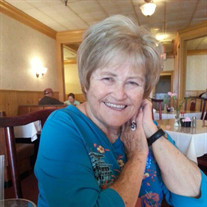 Imma Lorene Hawkins Daniels York Bentley Born 3 July 1935 at Mammy and Pappy’s home in Rickman TN Died 20 August 2020 at her condo in Madison TN Imma (Lorene) was preceded in death by her father, Oliver Payton Hawkins, and her mother, Eliza Jane Smith Hawkins, as well as her older brother Charles G. Hawkins, and her daughter, Mary Kathleena Daniels. Her husbands, James L. York and Ronald Bentley, also preceded her. She is survived by daughter Carrie (Barbara) Stapleton of St. Petersburg FL; daughter Aurora (Chris) Daniels of Madison TN; son Michael (Heather) Martin-Daniels of Cookeville TN; and daughter Danielle (David) Bentley Veazey of Spring Hope NC. Also surviving her is younger brother William Hawkins, and niece Kim, of Brentwood TN. Known to her step-children as Meemaw and to her grandchildren and great grandchildren as “Gran’ma Dodo,” a nickname that would NOT surprise you if you knew her. Imma graduated high school in Rickman, served in the US Air Force, and attended St. Thomas for her nursing training, later becoming a mental health nurse practitioner. She worked at Central State Mental Hospital and DeBerry Correctional Institute. As a Red Cross volunteer, she was at Ground Zero for 9/11 (passing out death certificates), and assisted survivors of numerous hurricanes and tornados, even working during Hurricane Wilma which “ate” her condo in Florida. Lorene loved to travel and was a traveling nurse in New Orleans (for Mardi Gras) and Oahu (for a view of Chinaman’s Hat). Thanks to her brother, Bill, she got to spend many winters “snowbirding” in Boynton Beach, FL, with her brother Charles and dear family friend, Roland Richter. The beach was definitely her happy place. The family wishes to thank those that cared for her during the final years, providing 24/7 coverage. Steve North was very kind to cover so many nights with her. Most especially the family wishes to acknowledge gratefully long-time friend, Jeffrey Ellis, for the love and care he showed Lorene during her declining health. For over a year, he lived in with her and her rescue Shih Tzu, Charlie, and his dog, Jessie. There is no way she could have stayed home until the very end without Jef’s sacrifices. A service will not be held at this time due to COVID, but the family hopes to have a celebration of life on Sunday, 22 August 2021, when hugging is, once again, the norm. Please put it on your calendar! For all the kin in the Overton County area and her sisters from Soroptimists, please know that your love and prayers are most graciously accepted. Should you wish to send a memorial, donations can be sent to the Lunch for Girls program: Soroptimist International of Music City Priscilla Tatarsky, Treasurer 153 Lakeside Park Drive Hendersonville TN 37075

The family of Imma Bentley created this Life Tributes page to make it easy to share your memories.

Send flowers to the Bentley family.