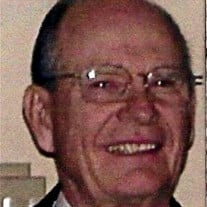 Dr Howard Elton Cummins, passed at the age of 91 surrounded by family and lots of love on Friday, Feb 1st, 2018. Dr. Cummins was preceded in death by his parents Ernest Alvin Cummins, Lois Elsie Cleghorn Cummins and stepmom Mary Barlow Cummins. He was also preceded in death by his brother Robert Alvin Cummins and Robert's sons, Steven, Cameron, Martin and survived by Brian of Kansas City. He was also preceded in death by our mother, his wife of 53 years, Donna M Lusk Cummins. Donna gave him three daughters and a son. Dr. Carol (Christine) Cummins Jones of Leadville, CO, and one grandson Jodiaz (Jody) Jameson Jones; Sandra Cummins DeLoach (hu. Dr. Joe DeLoach) and his children Angela Prows and Justin DeLoach) of Dallas, TX and granddaughter Megan Yankee; Linda (Kathleen) Stauffer (hu. Jim) of Clarkston, MI, and grandsons Michael (wi. Amanda) and Garrett; Hal Cummins (wi. Patti) of Coppell, TX., grandchildren Patrick Cummins and Dr. Rachel Cummins. After our mother's passing, Howard remarried Pat Gummow in 2003 and they shared another 15 years. With Pat came a new family including Pat's daughter Giana Gummow Reynolds (hu.Rod) of Wichita, KS, Giana preceded Howard in death and Pat's son, Phil Gummow of Dixon, CA. Pat gave him the joy of sharing her granddaughter Rena Reynolds Allgood (hu. Chris) and their four children Katelynn, Christopher, Grayson and Asher. Our family was blessed to have lived in Liberal, Kansas for our childhood and will always remember it fondly as home. We, the children of Howard and Donna Cummins and wife Pat Cummins are planning a memorial service in Liberal. We're not in Kansas any more so we are working on a travel date this summer and would encourage anyone who wants to be a part to contact us at [email protected] for details. Dad was healthy and active until his passing and still played a lot of games and cards with his family. He and Pat lived in Georgetown, TX., until very recently when they moved to be closer to Rena and Pat's great grandchildren in Gallatin, TN. Howard was a decorated veteran of WWII receiving the Victory Medal, the American Campaign Medal and the Asiatic-Pacific Campaign Medal. . He graduated with honors from UMKC with a doctorate in Dentistry. He was a member of the American & Kansas Dental Associations, Liberal Rotary and a number of other clubs and organizations in Liberal. Donations may be given to the charity of your choice in lieu of flowers. Favorites: The ALS Foundation or The Salvation Army, in his name.

The family of Dr. Howard Cummins created this Life Tributes page to make it easy to share your memories.

Dr Howard Elton Cummins, passed at the age of 91 surrounded by...

Send flowers to the Cummins family.