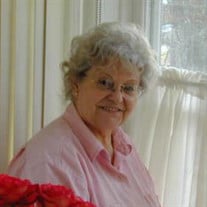 MYERS, Helen Kliewer Wiens, 92, of Hendersonville, TN and Traverse City, MI passed away peacefully surrounded by her family on March 1, 2020. She was lovingly know as “Oma” to many people. She is preceded in death by her parents Julius Kliewer (Germany) and Maria Klassen Kliewer (Buenos Aires), husbands Peter Wiens and Bill Myers (Michigan), sister Wanda Dyck (Buenos Aires), son-in-law, Ken Westbrook (Michigan). Survived by her daughter Julie Westbrook (Davisburg, MI), son Peter (Melinda) Wiens (Hendersonville, TN), grandchildren Sean Westbrook and Ryan Westbrook, Jake (Amanda McDowell) Wiens, Eric (Callie) Wiens, 2 great grandchildren, Isla and Mac. Helen was born in Zaporizhzhia, Ukraine on June 20,1927 in a German Mennonite community. She received her education in the Ukraine speaking both Russian and German. In 1943 during WWII she fled with her family to Poland to escape the advancing Russian front. When Poland was invaded by the Russians in 1944 they fled further to Dresden and Munich Germany. She lived and worked with her family doing various jobs which included secretary and translator for military posts and continued living in refugee camps as they pushed westward to stay ahead of the encroaching Russian front until the end of the war in 1945. They continued to work and live in refugee camps until 1947 when her father, with the help of the Mennonite Central Committee, was central in arranging passage for 2,000 Mennonite refugees to settle land in central Paraguay to start several new Mennonite Colonies. She met Peter Wiens on the ship Volendam during their 21 day cruise from Bremerhaven, Germany to Paraguay. They would marry and Julie and Pete would be born in Asuncion, Paraguay. In 1958 the family left Asuncion and immigrated to Omena, Michigan with the help of her cousin Frieda Putnam and her American husband as sponsors. They lived, worked and raised their family in Traverse City, Michigan until in 1967 she remarried to Bill Myers. In 1999 she moved to Hendersonville, TN to be near family. The family would like to thank the staff of White House Health Care for the love and care shown to their “Oma”. In lieu of flowers contributions may be made to the Breast Cancer Research Foundation. www.bcrf.org Visitation will be Saturday, March 14, 2020 from 10:00 am to 11:30 am with memorial service at 11:30 at Phillips-Robinson Funeral Home, Old Hickory, TN Chapel. PHILLIPS-ROBINSON FUNERAL HOME www.phillipsrobinson.com, 615-262-3312

MYERS, Helen Kliewer Wiens, 92, of Hendersonville, TN and Traverse City, MI passed away peacefully surrounded by her family on March 1, 2020. She was lovingly know as &#8220;Oma&#8221; to many people. She is preceded in death by her parents... View Obituary & Service Information

The family of Helen "Oma" Myers created this Life Tributes page to make it easy to share your memories.

Send flowers to the Myers family.