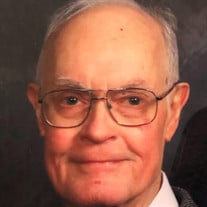 Harlan W. Peithman, Jr. (“Doc”), age 89, passed away on February 19, 2021. He was born in Mendota, IL, May 1931. Harlan was raised in Normal, IL, and graduated high school as Valedictorian in 1949. He attended Illinois State University where he earned the nickname “Little Doc” to differentiate from his father, Dr. Harlan Peithman, Sr., who was a music professor there. “Little Doc” was soon shortened to “Doc”, and this stuck for life. He later transferred to University of Illinois, and there, met Joanna McBride. After graduation Doc and Jo married and moved to the Detroit area, where he had been hired at Ford Motor Co. Doc was drafted into the U.S. Army, assigned tank testing, and honorably discharged in 1955. He resumed work at Ford where he was employed as a mechanical engineer (sound and vibrations) for 37 years. He was honored with the Henry Ford Technological Award in 1984 for his innovative design on the Taurus. Doc and Jo raised two daughters, Janet Clare and Lynn Marie, while living in Livonia, MI. He was a dedicated husband and father, and truly a gentlemen in words and actions. In 1990 Doc and Jo retired to Bloomington, IN, spending 27 years enjoying the many concerts and performances Indiana University had to offer. They were dedicated members of their church choirs for over 60 years (Rosedale Gardens United Presbyterian in Livonia and First United Methodist in Bloomington). They were world travelers, and loved classical music, sailing on small MI lakes (especially near Interlochen), and their many long-term friendships. In August 2018 Doc moved to Arcadia Senior Living in Clarksville, TN to be exactly halfway between his two daughters. Harlan was preceded in death by his loving wife of 65 years and best friend, Joanna, his parents, Harlan and Mollie Peithman, brother, Wayne Peithman, and sister, Charlene Hecht. He leaves behind his daughters, Janet (James) Agin of Madisonville, KY, Lynn Peithman of Nashville, TN, grandchildren, Noah Lamont, Matthew and Michael Agin, and great grandchild, Serenity Agin. No services are planned at this time due to Covid. In lieu of flowers, donations can be made in Harlan’s memory to: The SAI - Joanna Peithman Scholarship Fund ℅ Vicki King, 1906 S. Sussex Dr, Bloomington, IN 47401 The Charles and Kendra Webb Fund at indianauniversity.edu The Nashville Symphony Orchestra at nashvillesymphony.org/give or mailed to Nashville Symphony, One Symphony Place, Nashville, TN 37201, indicating Harlan Peithman in the memo.

The family of Harlan Wesley Peithman Jr. created this Life Tributes page to make it easy to share your memories.

Send flowers to the Peithman family.