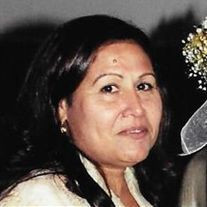 Gladys Alicia Rabassa De Franco, 55 of Lakeland, Florida went home to be with our Lord on October 14, 2015 in Clarksville, Tennessee. She was born on April 12, 1960 to Jose Eustaquio Rabassa and Adelaida Vazquez in Coamo, Puerto Rico. In 1986... View Obituary & Service Information

The family of Gladys Alicia Rabassa De Franco created this Life Tributes page to make it easy to share your memories.