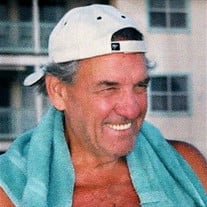 George Bruce Sulfridge, 84, of Nashville, Tennessee, passed away on February 14, 2019, at Vanderbilt University Medical Center in Nashville due to complications following a stroke. George was born December 12, 1934, in Coeburn, Virginia, to... View Obituary & Service Information

The family of George Bruce Sulfridge created this Life Tributes page to make it easy to share your memories.

Send flowers to the Sulfridge family.