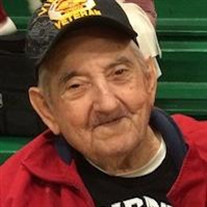 Fredrick (Fred/Ricky) Garbo, 85, a former long-time resident of Junction City, KS passed away at his home Dec 14, 2019 in Ashland City, TN. He was born January 2, 1934 in Benton, IL; the youngest child of James and Louise (Vierne) Garbo. He was a graduate of Benton High School and an alumnus of Southern Illinois University. Fred joined the Army in 1951 and served until 1974 when he was medically discharged from injuries sustained during a tour of duty in Vietnam. During his time in the armed service, he was stationed in Germany. While there he met and married Marianne E. Graupner. They were married, December 20, 1960 in Basel, Switzerland. After retirement, Fred worked for Geary County Schools in Junction City, KS as a school bus driver until May 2005. Fred was a long-time active member to the Earl L. Jones VFW Post #1594 in Grandview Plaza, KS. He loved golf, baseball, fishing, gardening, and many other sports. He was a longtime supporter of the University of Illinois athletics and the St. Louis Cardinals. He adored his grandchildren and great grandchildren and was their biggest fan attending many of their extra-curricular activities. He was preceded in death by wife Marianne and his son, James L. Garbo. Fred is survived by three children and two step children: Bernard (Bernard Zinck) Chicago, IL., Maria Chapman (Sidney) Ashland City, TN., Denise Hoff (Kenny) Junction City, KS., Michelle Nixon (Tim) Ashland City, TN., & Samantha Spiller, Hotsprings, AR., as well as 15 grandchildren, numerous great grandchildren and nieces and nephews. Memorial Services will be held at Phillip & Robinson Funeral Home in Nashville, TN, Saturday, January 25th, 2020 from 2:00 to 4:00 PM. The interment of his ashes will be at Skiddy Cemetery in rural Geary County, KS, this summer (TBA). In lieu of flowers, the family asks to please make a donation in his name to the national or local office of the ASPCA, your local animal shelter, or to the national or local YMCA Youth Sports.

Fredrick (Fred/Ricky) Garbo, 85, a former long-time resident of Junction City, KS passed away at his home Dec 14, 2019 in Ashland City, TN. He was born January 2, 1934 in Benton, IL; the youngest child of James and Louise (Vierne) Garbo. He... View Obituary & Service Information

The family of Fredrick Burley Garbo created this Life Tributes page to make it easy to share your memories.

Send flowers to the Garbo family.