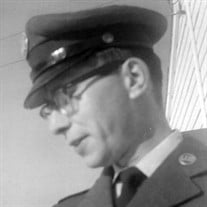 Francis Eugene (Frank) Balcik, 92, of Nashville, TN, Peacefully passed away in his sleep January 15, 2021. He lived in Inglewood after discovering Tenn. with his wife of 50 years, Gigi. They moved here after dad retired from the US Air Force after 23 years of dedicated service. He began his storied career as a journalist reporting about the Korean conflict from the Philippines in the Army newspaper the Daily Pacifican where he became executive editor. It was an exciting start for a young Minnesota kid fresh off the farm. His military career was diverse in duties, spanning decades and continents as he proudly served. During his travels of being stationed in outposts such as Tripoli, Wiesbaden, and Lakenheath, UK Air Force Base. During his Military career, he fell in love, got married and had us kids. After retiring from military service as SMSGT, he joined the TN State Medicaid Department for 20+years. He worked assisting needy kids to get the medical aid and supplies they deserved. He was vital in running the gauntlet of a difficult system and developed integral policies leveling the playing field for disadvantaged children to get medical aid. He was ultimately invited as keynote speaker on the topic in Amsterdam. Dad was an avid reader, even writing a book to navigate the Medicaid system, as passing on knowledge is a characteristic which he strongly believed. He took the family to the library all the time and taught us all a love of reading and respect for higher learning. He believed in helping others, and we loved his generous heart and spirit. He was a world traveler and wanderlust is his second reason for joining the service, the first being an education. He is the most loyal alum to his beloved alma mater, University of Minnesota, home of the golden gophers and he was tickled to sing their fight song with very little urging at any/all gatherings. He and mom were green thumb gardeners and taught us well ahead of the trends today on how rewarding it is to grow one's own food. We all remember his short row of corn every season. TN is not ideal for one of "the three sisters": corn, beans, squash) and hearing the Minnesota phrase of his "corn needing to be knee high by the 4th of July". He was active at Brush Hill Presbyterian as well as the American Legion and local library. Ultimately he devoted his retirement years, along with wife Gigi, to his grandchildren, which were his pride and joy. He was tough, gracious, gallant and one of the funniest and most engaging people to spend time with. He was spry and never looked his age nor acted it either, adding to his charm. He was so special and will always be remembered. We will always remember you, dad and grandpa. He is preceded in death by his wife, Gigi Balcik. Survived by his daughters, Valerie Lee, Steffi (Paul) Sutton & Nina (Ray) Burghard; grandchildren, Mikaela, Ben, Hayley, Gracie, Paris & Chase. A celebration of life with full military honors will be held at Nashville National Cemetery at a future date. In lieu of flowers, please make donations to the Honor Flight Network (https://www.honorflight.org/ways-to-donate.html). Phillips-Robinson Funeral Home, www.phillipsrobinson.com

Francis Eugene (Frank) Balcik, 92, of Nashville, TN, Peacefully passed away in his sleep January 15, 2021. He lived in Inglewood after discovering Tenn. with his wife of 50 years, Gigi. They moved here after dad retired from the US Air Force... View Obituary & Service Information

The family of Frank Balcik created this Life Tributes page to make it easy to share your memories.

Send flowers to the Balcik family.