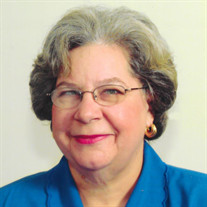 Frances Dyess Rodgers passed peacefully on January 19, 2022. This was also her 79th birthday, as she was born on January 19, 1943. She was preceded in death by her parents, William B. and Mary Dyess, and her siblings, brothers Bill and Jim. Survivors are her husband of 56 years, William S. “Sandy” Rodgers, children Ben Rodgers and wife Bobbi, and Charlotte Wallenfang and husband Francis, four grandchildren, Benjamin and Mary Rodgers, and Lee and Jamie Wallenfang, and one great-grandson Evander Rodgers. Frances was a graduate of Wake Forest University. She started her career teaching middle and high school French, and ultimately became a high school English as a Second Language (ESL) teacher. She received especially great satisfaction teaching ESL in the Fairfax, VA area, as her classes consisted primarily of the children of refugees and diplomats from all over the world, spoke many different languages, and entered her classroom often with no or very limited English - some refugees with little to no previous formal education. She enjoyed learning about their backgrounds and cultures, including opportunities to taste traditional foods some would bring in to share. She taught all subjects in English, and on occasion would ask the various students to assist as translators, to better communicate the concepts across all the various languages involved. Frances was a very smart, intelligent, and intellectual person, and after some relocations due to Sandy’s career, she went into the field of insurance accounting in the home offices of Aetna, and later forensic accounting with Marsh & McLennan where she worked preparing large insurance claims for clients. She was also very social, and enjoyed travel, sewing, baking, playing bridge, and attending the sporting and other events of her children and later grandchildren. She also enjoyed visits to many national parks, and one of her most enjoyable trips was a tour of Alaska some years ago with many members of her Sunday School class, as well as trips to Europe. She also enjoyed her Sunday School class (Wesley Forum) at Brentwood United Methodist Church. Frances was not only an intellectual but also very independent. She was a strong advocate and protector of her family, especially her children. When she felt someone had been wronged she would immediately step forward to see that the wrong was corrected. She was a devoted wife, parent, mentor and friend, and was dedicated to supporting and motivating all those around her. The family would also like to express their appreciation to those who made her last years so much better, including the Sunny Day Club at Brentwood United Methodist Church (BUMC), and the care-givers of Harmony Square, the memory care facility of Harmony At Brentwood, where she received such wonderful care over the past year. A memorial celebration of her life will be scheduled at BUMC in the coming days. A burial service will later be held in Stuart, VA in the Rodgers family plot. If desired, in lieu of flowers, donations can be made to Brentwood United Methodist Church, or their Wesley Forum Class, 309 Franklin Road, Brentwood, TN 37027, or the Alzheimer’s Association.

Frances Dyess Rodgers passed peacefully on January 19, 2022. This was also her 79th birthday, as she was born on January 19, 1943. She was preceded in death by her parents, William B. and Mary Dyess, and her siblings, brothers Bill and Jim.... View Obituary & Service Information

The family of Frances Dyess Rodgers created this Life Tributes page to make it easy to share your memories.

Send flowers to the Rodgers family.