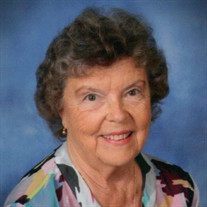 Lida Ernestine Miles Hawkins On Sunday March 6, 2022, God called home His good and faithful servant, Lida Ernestine Miles Hawkins. She went to meet Jesus after pouring herself out in service of God’s Kingdom. Married for 67 years to Alvin R. (Pal) Hawkins, they rarely spent more than a few days apart during all those years; they were always affirming their love for each other. Ernestine managed the Hawkins’ farm and properties while rearing 5 sons, all of whom became Eagle Scouts. Ernestine was a selfless giver, a trust-worthy leader, a wise counselor, and a faithful disciple. These traits were manifested in her leadership and work at the Old Hickory Christian Community Outreach Center for 32 years. She sang in the Old Hickory United Methodist Church Choir for more than 50 years and taught a Sunday School class for over 40 years. She was an excellent cook, avid gardener, and a skilled seamstress, making many of her own clothes. She was also a proud & loving grandmother of twelve and a great-grandmother of two. Born October 23, 1933, Ernestine was the second daughter and third child of Murray Thomas Miles and Ernestine White Miles. She was raised on a dairy farm during the depression. As a child, she worked hard supporting the family farm and knew what it was like to have very little. These formative years inspired her sense of compassion, dedication, and thrift. Ernestine was a 4-H All Star, showed dairy cows and won several awards. She graduated from Murfreesboro High School and graduated from Middle Tennessee State College (now University) where she met Pal Hawkins. While it may have been love at first sight for Pal, Ernestine still had some things to accomplish. She was preparing to compete as Miss Murfreesboro in the 1954 Miss Tennessee Pageant in Jackson, Tennessee. She was first runner-up for Miss Tennessee and, later that year, Pal & Ernestine married on December 22, 1954. They made their family home in Old Hickory. She taught math at DuPont High School, but this career was short-lived as the first of five sons came along. Many say that Ernestine deserved “sainthood” for managing five boys, but they underestimated how much more she had to give. She was the solid foundation of the Hawkins family; determined and organized in all of her endeavors. She served as President of the PTA (3 times), President of the Cumberland River District United Methodist Women (2013 Woman of the Year in Missions), member of the Chamber of Commerce (1994 Hadley Bend Chamber of Commerce Outstanding Community Service Award), member of the Daughters of the American Revolution, and Chairperson of the Board of Directors for the Old Hickory Christian Community Outreach Center for 22 years. She is survived by her loving husband Pal Hawkins and their five sons and family: David (Marjorie) Hawkins of Nashville, Rody (Vina) Hawkins of Raleigh, N.C., Steve Hawkins of Old Hickory, Andy (Betty) Hawkins of Brentwood, and Kenny (A.B.) Hawkins of Brentwood; twelve grandchildren: Catherine Hawkins, Kelsey (Samiksha) Hawkins, Kena (William) Newkirk, Kenan Hawkins, Stephen (Hollie) Hawkins, Grace (Michael) Franklin, Ashley Hawkins, Alexis (Zack) Holland, Neal (Esther) Hawkins, Chris Hawkins, Matthew Hawkins, Jack Hawkins; two great-grandchildren: Henry Hawkins, Jonah Newkirk; brother and sister-in-law: Kenneth and Janet Miles; brother-in-law: Jesse Martin; and many nieces and nephews. In addition to her parents, she is preceded in death by her brother and sister-in-law Murray and Mary Jane Miles, her sisters: June Miles, Sara Martin, Nina Bagwell, and brother-in-law James Bagwell. The family will receive friends at Phillips-Robinson Funeral Home, Hadley Chapel in Old Hickory from 4:00 – 7:00 p.m. on Friday, March 18, 2022. Celebration services will be held at Old Hickory United Methodist Church at 2:00 p.m. on Saturday, March 19, 2022 with visitation starting at 1:00 p.m. Flowers are appreciated but memorial contributions can be sent to Old Hickory UMC.

The family of Ernestine Hawkins created this Life Tributes page to make it easy to share your memories.

Send flowers to the Hawkins family.