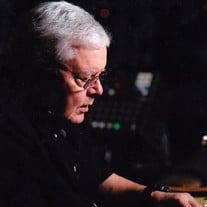 NASHVILLE &#8211; Ernest Lee &#8220;Ernie&#8221; Winfrey, age 77, passed away Tuesday, May 14, 2019 in Skyline Hospital in Nashville. Ernie was a sound engineer for 23 years at Woodland Studios and SoundShop Studios, and worked closely with... View Obituary & Service Information

The family of Ernest Lee "Ernie" Winfrey created this Life Tributes page to make it easy to share your memories.

Send flowers to the Winfrey family.