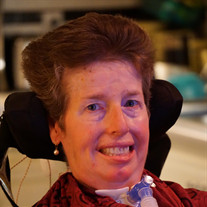 Erin Brady Worsham, 62, passed away at home on June 2, 2021 in Nashville, Tennessee, after a battle with cancer. Erin was born in Schenectady, New York on August 6, 1958 to James and Mary (Brown) Brady, who preceded her in death. The family moved to Louisville, Kentucky in 1963 where Erin attended Mother of Good Counsel School and Sacred Heart Academy(1976). She graduated with a double major in theatre and German from Western Kentucky University (1980) where she performed in many stage productions. Erin and her husband, Curry met while performing in professional theatre and were married in 1987 in Louisville. Inspired by her artistic mother, she pursued a career as an artist and studied at Watkins Art institute. Erin was diagnosed with ALS (Lou Gehrig's disease) in September of 1994 and miraculously gave birth to their son, Daniel, 9 months later. After becoming paralyzed, she relearned her painting skills, using a computer with a sensor attached to her forehead. Through this painstaking process, she became a productive and inspiring artist for many years. The highlight of Erin's life with ALS was her amazing journey to Bretton Woods to ski down Crawford’s Blaze as the first person with ALS on a vent to ever ski anywhere. Erin was an indomitable spirit who accumulated many friends throughout her life, who love and are inspired by her personality, talent, courage and spiritual devotion. She will be deeply missed. Erin is survived by her husband of 33 years, Curry; son Daniel, of Knoxville; siblings Kelly Dockter Dean (Rob) of Louisville; Shannon Lutz (Steve) of Nicholasville, Kentucky; Shawn Brady (Amy) of Springboro, Ohio; Pat Brady of Louisville; brother-in-law Gibson Worsham (Charlotte) of Kent Store, Virginia. She is also survived by her nieces and nephews: Terri Densford (Mark), Michael and Ryan Dockter and Trevor Dean; Emily and Christopher Brady; James, Collin, Molly, and Megan Lutz; Richard (Amy), Charles, Braxton and Stephen Worsham. A Funeral Mass will be conducted at 11:00 A.M. on Saturday, June 12, 2021 at Holy Name Church with burial to follow in Spring Hill Cemetery. The family will receive friends from 4:00 p.m. until 8:00 P.M. Friday, June 11, 2021at Phillips-Robinson Funeral Home with Rosary at 7:00 P.M. Donations may be made to the ALS Association Tennessee Chapter. Masks will be required for all attendees of services at Holy Name Church.

Erin Brady Worsham, 62, passed away at home on June 2, 2021 in Nashville, Tennessee, after a battle with cancer. Erin was born in Schenectady, New York on August 6, 1958 to James and Mary (Brown) Brady, who preceded her in death. The family... View Obituary & Service Information

The family of Erin Brady Worsham created this Life Tributes page to make it easy to share your memories.

Send flowers to the Worsham family.