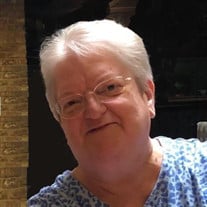 Donna Bridges, beloved sister, aunt, and cousin, and friend, suffered heart failure at the age of 63 on October 1, 2020 in Nashville, TN. Despite numerous health issues, she led a happy and successful life. To many, she was loving, supportive, focused, faithful. To family, friends, and coworkers, she was a moral compass who told you what she thought when asked and was firm on the need for honesty and responsibility. She was always giving, donating to numerous charities and support groups. Her dedication to family led to her excellence in genealogy, helping others with discovery and verification of intricate details of family details (both her own and random strangers). Donna was a very private person, sharing often only on a need-to-know basis, but in apparent contradiction, was one of the friendliest people one could ever meet. She was born at Ft. Campbell, KY to Joseph Hobson and Lillian Wear Bridges. She called home wherever they lived, from Dickson, TN to KY to Massachusetts. She graduated from White House High School (TN). She attended 3 years of Western KY University at Bowling Green before deciding the working world was where she belonged. Donna’s career primarily involved records management and data control. Working for various companies, her jobs took her from TN to CO and back to TN, while her education continued until she earned a CRM (Certified Records Manager) credential from ARMA. She served 15 years for State of TN Records Management Division, with the last seven as Director. She retired in 2011. Following retirement, she enjoyed genealogy, reading, her sister’s two Shih Tzus, family, and traveling, especially cruising or driving around the USA with her sister. Donna is preceded in death by both parents and one brother, Baby Boy Bridges. Her surviving siblings are Joseph H. Bridges (& Yong, Clarksville, TN), Mary Ann Sharpe (& Jim, Shih Tzus- Scooter, Harley (all deceased), Clarksville, TN), and Gary W. Bridges (& Beverly, Adams, TN). Donna is also survived by nieces- UnHui Vandevander (Scott, sons-Chris & Alex), Dianna Bridges (Nathan, son-Samuel), Amanda Powers (Clay, son-Brandon (daughters-Ella, Emory), daughter-Charlsie Nauert (Blake, daughter-Harper, son-Jaxon ) and nephews-Matthew Bridges (Emily, sons-Roman & Caleb), Steven Bridges (daughters-Emily, Alexandria, son- Evan), Brandon Bridges (Ashley, son-Lincoln), and Mark Bridges, sons-Joseph & Elijah). Donna’s family also includes numerous cousins throughout the country who were close to her heart. Donna wanted no eulogy or summation of her life. She felt the impact of her life on others spoke enough. She is greatly missed. In memory of Donna, please consider making a donation to one of her favorite interests: Snooty Giggles Dog Rescue, St. Jude Children’s Research Hospital or Daymark Pastoral Counseling.

Donna Bridges, beloved sister, aunt, and cousin, and friend, suffered heart failure at the age of 63 on October 1, 2020 in Nashville, TN. Despite numerous health issues, she led a happy and successful life. To many, she was loving, supportive,... View Obituary & Service Information

The family of Donna Kathleen Bridges created this Life Tributes page to make it easy to share your memories.

Send flowers to the Bridges family.