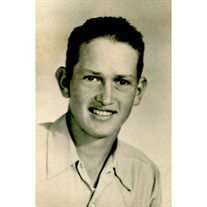 Dennis Miles Brown, born in Estancia, New Mexico in 1938, departed this life on Tuesday, September 8, 2015, in Nashville, Tennessee, at the age of 77, after multiple illnesses in recent months. He was preceded in death by his much-loved parents, Bertha Emmaline Crider and Claude Brown of Estancia; infant sister Hazel Adele Brown; and elder brother Virgil Brown of Albuquerque, NM. He is survived by two daughters, Lynli (Phil) Vincion and Shelli Dimarco, and grandchildren Savannah and Elliott Vincion, all of Nashville; sisters Corene Stevens of Albuquerque and Margaret (Paul) Good of Kyle, TX; brothers Roger (Gelna) Brown of Albuquerque and Adron (Kay) Brown of Estancia; 23 nieces and nephews; and his former wife of 43 years, Frances Brown, with whom he remained friends. Dennis was a member of Woodson Chapel Church of Christ of Nashville, whose members offered him friendship and solace in a time of need. His daughters are grateful for the comfort the church provided throughout his illness. Dennis graduated in 1956 from Estancia High School, where he lettered in track, baseball, basketball and football. In 1969, he earned a Bachelor of Arts from Eastern New Mexico University, and taught school for a short time before choosing a career of bus driving for Continental Trailways and Greyhound Bus Lines. A skilled driver for over 35 years, he gave his passengers enjoyable trips by telling jokes and helping them any way he could. A talented carpenter, he virtually single-handedly built two of his family's homes in New Mexico, and continued to do carpentry until shortly before his last illness. He derived enjoyment from engaging in lively discussions with family, friends, and new acquaintances that he met in his daily travels. Dennis will be remembered for his kindness, patience, generosity, and his signature closing remark to almost everyone he encountered of "May life be kind to you." His daughters wish that he be remembered as a loving father who was always there for them. He will be missed immensely.

Dennis Miles Brown, born in Estancia, New Mexico in 1938, departed this life on Tuesday, September 8, 2015, in Nashville, Tennessee, at the age of 77, after multiple illnesses in recent months. He was preceded in death by his much-loved parents,... View Obituary & Service Information

The family of Dennis Brown created this Life Tributes page to make it easy to share your memories.

Send flowers to the Brown family.