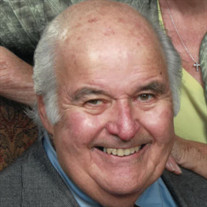 David Young Parker, Sr., longtime Nashville Attorney, passed away on January 23, 2021 after contracting COVID-19. He was born on March 21, 1941 in Chattanooga, TN to the late Arthur Harry Parker and Sarah Tittle Parker. He was predeceased by his brothers Brian Parker (1936) and Robin Parker (2004). He is survived by his wife, Sandra Rhodes Parker, his children, David Parker, Jr. (Michelle) of Littleton, CO, Deborah Hinson (Michael) of Brentwood, and Samir Osman of Nashville. He is survived by seven grandchildren, Sarah Robinson (Colin), Caleb Parker, Thomas Parker, Connor Hinson, Lauren Hinson, Mason Osman and Silas Osman and one great-grandson, Mason Robinson. He grew up in the Highland Park neighborhood of Chattanooga and was a graduate of Chattanooga High school in 1959. He received a B.A. degree from David Lipscomb College in 1963, and LL.B/J.D. degrees from the Vanderbilt University School of Law in 1966. He practiced law for 53 years, having worked for Provident Life and Accident Insurance Company, the State of Tennessee, and GENESCO. He entered private practice of law in 1975, working in Lafayette, Tennessee until 1977 and in Nashville afterwards. He maintained a law office on Second Avenue North from 1981 until 2001. He taught Business Law as an adjunct professor at David Lipscomb College for many years and served as a judge in Vanderbilt’s Moot Court. He served on the Board of Directors for Nashville Christian School, was a member of the Board of Directors for the Tennessee Supreme Court Historical Society. He was Chairman, emeritus, of the Historical Committee and the Memorial Service Committee of the Nashville Bar Association. He was a member of the Donelson Rotary Club and was a Paul Harris Fellow. He was a member of the Jackson Park church of Christ. He was a student of history and loved to read. He was an avid baseball fan who also cheered for Vanderbilt and the Tennessee Titans football teams. He was fascinated by trains, especially riding historic railroads and collecting Lionel electric trains. He enjoyed singing and served as the song leader at several area churches of Christ. He relished the years that they lived at 714 Russell Street in historic Edgefied, and he enjoyed entertaining many friends at that home. Donations in his memory can be made to the Second Harvest Food Bank or the Nashville Inner City Ministry. A private memorial service will be held for the family and a celebration of life will be held for the public in the future.

David Young Parker, Sr., longtime Nashville Attorney, passed away on January 23, 2021 after contracting COVID-19. He was born on March 21, 1941 in Chattanooga, TN to the late Arthur Harry Parker and Sarah Tittle Parker. He was predeceased... View Obituary & Service Information

The family of David Young Parker Sr. created this Life Tributes page to make it easy to share your memories.

Send flowers to the Parker family.