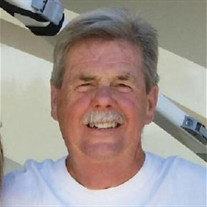 My dad Dave Weller was born on January 15, 1944 in Toledo Ohio. His parents were Vincent and Catherine Weller. There were five children in his family, 2 sisters (Diane & Connie) and 2 brothers (Kenny & Jerry). My dad was married to my mom Mary (now an Angel in heaven), and had their first daughter together …which is me ..Melanie. I have 4 kids(Chris, Kaitlynn, Alyson, and Ryan) whom every chance he got would always came out every year or we would go to visit my dad so we could all visit and he could spend time with his beloved grandkids. I also have a brother named John that my dad raised since he was 9 years old. My brother has two kids (Becka & Nick) and a granddaughter (From Becka)(currently expecting again) whom my dad loved very much. My dad then met and married Marty his wife of 35 years. Marty had a daughter (Dana) and 2 sons (David & John) and grandkids whom my dad loved very much as his own. My dad moved a few years ago to live with his companion, Pat Harris, in Tennessee. My dad moved to California in the mid 60s after graduating in DeVilbiss H.S. in 1962 and becoming an electrician which then started working for General Motors as an electrician from late 1960s until late 1980’s when the plant closed down. My dad became a huge part of the Chino Valley Chamber of Commerce when he moved to chino hills with Marty. He was elected to the board of directors in 1992 and then to the executive board in 1994. He became the president of the chamber in 1996 through 1997. Dave and Marty went on to open a small printing business in Chino that they had together for many years. My dad helped out many people and was very involved in political fundraising events for cities, counties and state offices which many of them still hold to this day. I am very proud of my dad for all the things that he has accomplished and all the contributions that he has made in his lifetime. My dad‘s favorite hobbies were boating, fishing, golf and most of all traveling the USA in his motorhome! He loved boating and being on the water, like father like daughter lol. We love you so much dad ❤️ Remembering You Is Easy, I Do It Everyday... But Missing You Is A Heartache That Never Goes Away 💔 I Hold You Tightly Within My Heart And There You Will Remain, Until The Joyous Day Arrives That We Will Meet Again DAVID A. WELLER 01/15/1944 – 02/17/2022 With heavy hearts we announce the passing of our beloved Father, Brother and Friend. He was loved and cherished by many people during his life and will be greatly missed. Born in Toledo, Ohio, Dave moved to California after High School. He was a long time employee of General Motors from which he retired. He and his wife of twenty-eight years, Marti Weller, opened a very successful print shop (Express Printing) in Chino, California and were very active in the community. He served as President of the Chamber of Commerce and was awarded Outstanding Citizen for Chino Valley in 1995. Dave and Marty retired in Bullhead City, Arizona where they developed and enjoyed many wonderful friendships. Dave moved to Tennessee in 2017 and enjoyed country-life until his passing on February 17th at Vanderbilt Hospital. Dave is preceded in death by his parents: Vincent and Catherine Weller and wife, Marvel Weller. Surviving are Children: David Hall, Dana (Doug) Hays, John (Kristen) Weller, John Hall and Melanie Weller. Siblings: Diane (Jerry – deceased) Spare, Connie (Chuck – deceased) Mullikin, Kenny (Gail) Weller and Gerry (Cheryl) Weller. Dave had nine beautiful Grandchildren and three wonderful Great Grandchildren. In the words of a beloved friend: Do not weep for me. My journey has just begun. Old friends await for me above the horizon and my Lord accompanies me. All will be as it is promised, so rest assured we will see each other again.

My dad Dave Weller was born on January 15, 1944 in Toledo Ohio. His parents were Vincent and Catherine Weller. There were five children in his family, 2 sisters (Diane & Connie) and 2 brothers (Kenny & Jerry). My dad was married to my mom... View Obituary & Service Information

The family of Dave Weller created this Life Tributes page to make it easy to share your memories.

Send flowers to the Weller family.