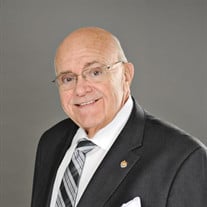 Charles E. “Buddy” Worrell, Sr. Age 78 of Ridgetop, TN, passed away Monday, July 19, 2021. Preceded in death by his parents, Bill and Bessie Worrell; wife, Jane Bearden Worrell. Survived by his son, Charles E. “Gene” Worrell, Jr. (Chris Taylor). A graduate of East Nashville High School, he was a graduate of Emmanuel Bible College and St. Martin’s College and Seminary. He was the Pastor of Faith Methodist Church since February of 1970 and had been a licensed Funeral Director since 1968. “Buddy” had served and progressed in numerous leadership positions on the local, state, and international levels of The Independent Order of Odd Fellows and Rebekahs (and affiliate groups) ultimately leading to his installation in 1993 to the top IOOF international position of Sovereign Grand Master. He had continued afterwards to serve the organization in other roles. Through the years he had served the community at various funeral firms and currently was a long time and cherished employee of Phillips-Robinson Funeral Home and was continuing to serve families as a funeral director and had also previously served as the firm’s General Manager. Visitation will be on Friday, July 23rd from 1-3pm and 4-8pm at Phillips-Robinson Funeral Home. An Odd Fellows Memorial Service will be conducted at 7pm. Funeral Services and a celebration of Buddy’s life will be conducted on Saturday, July 24th at 11am at the Faith Methodist Church, 419 Ezell Pike, Nashville, TN, with visitation beginning at 9am, Dr. Patrick Wells, Dr. Richie Rogers, and Rev. Shane Hessey officiating, with the Eulogy delivered by Stan Churchwell. The gathering of friends and family for food and fellowship brought Buddy immense joy…to honor this memory, a fellowship gathering will be held at the church immediately following the service. A private interment for the family will be held at Spring Hill Cemetery, Rev. Shane Hessey officiating. Honorary Pallbearers: Members of Faith Methodist Church, the Odd Fellows and Rebekahs of Tennessee, and the staff of Phillips-Robinson Funeral Home. Active Pallbearers: Mark Ladd, Leslie Ladd, Terry Barrett, Richard Baker, Joe Lannom, Wade Coffman, Byron Whitehurst, Matt Terry, and Stan Churchwell. For those desiring, memorial contributions may be made to Faith Methodist Church, 419 Ezell Pk. Nashville, TN 37217, or Tennessee Lodge No. 1 IOOF, 230 James Street, Gallatin, TN 37066. Phillips-Robinson Funeral Home, 2707 Gallatin Pk. (615)262-3312.

The family of Rev. Dr. Charles E. "Buddy" Worrell, Sr. created this Life Tributes page to make it easy to share your memories.

Send flowers to the Worrell family.