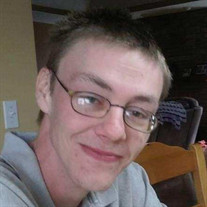 Carl &#8220;C.J.&#8221; Leslie Summers, Jr., Age 33, of Hendersonville, TN. Passed away on November 26, 2021. Preceded in death by his grandfather, Vester B. Miller; grandparents, Lori and Dave Summers. He is survived by his mother, Theresa... View Obituary & Service Information

The family of Carl "C.J." Leslie Summers Jr. created this Life Tributes page to make it easy to share your memories.

Send flowers to the Summers family.