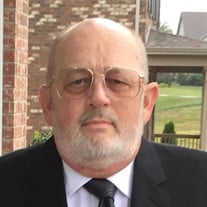 Bruce Edward Orndorff Age 72 of Gallatin passed away on May 8, 2020. He is preceded in death by his parents, Wayne and Doris Orndorff. Survived by his wife of 35 years, Janet Orndorff; brother, Neal Orndorff; sister, Becky (Rick) Gilleylen; children, Michael (Reva) Orndorff, Edward (Alicia) Qualls, and Jonathan (Leslie) Qualls; grandchildren, RheeAnn, Ian, Landon, Gavin, Adalynn, Curtis, and Carrigan. The past year Janet was able to join Bruce in his travels, enjoying every moment together. Bruce loved traveling and his jobs delivering expedited freight gave him the chance to enjoy our beautiful country. Bruce served others in many different capacities. He loved Jesus and wanted to share God’s love. His talent was providing wonderful meals for others, especially those in need. He cooked meals for Room in the Inn. He made several mission trips to the Appalachian Mountains where he cooked for all the construction volunteers. In addition, he filled his 22ft. truck with food, supplies and mattresses for those in need. He continued his service to others by cooking meals for the East Nashville Tornado Victims and the homeless. At a young age, growing up in Akron Ohio, Bruce became a Boy Scout which would lead to a lifelong affiliation with the organization. Later in life he became a Scout Master at Troop 133 in Hendersonville, TN and under his leadership he had the privilege of guiding seven young men to become an Eagle Scout. Visitation will be at Phillips-Robinson Funeral Home, 2707 Gallatin Rd., on Tues. May 12 from 10AM until the time of service at 12PM in our chapel. Additional visitation will follow the service from 12:30PM to 1:00PM. Due to the pandemic, social distancing guidelines will be followed to protect our guests and it is suggested masks be worn. A graveside service will be held on Wed. May 13 at 10 AM at Spring Hill Cemetery. Pallbearers will be Michael Orndorff, Edward Orndorff, Jonathan Qualls, and Rick Gilleylen. Honorary Pallbearers are Ian, Landon, Curtis and, Gavin Qualls, Neal Orndorff, Johnny and Ron Austin, Rick Berry, Clay, John, and James Clark, James Deal, Victor Mims, Chris and Jimmy Hall, Tony Cox, Ron Roach, and the Elders at Jackson Park Church of Christ. In lieu of flowers the family suggests memorials be directed to Jackson Park Church of Christ, 4103 Gallatin Pk. Nashville, TN 37216 or Churches of Christ Disaster Relief Effort, Inc., P.O. Box 111180 Nashville, TN 37222-1180. PHILLIPS-ROBINSON FUNERAL HOME, (615)262-3312.

Bruce Edward Orndorff Age 72 of Gallatin passed away on May 8, 2020. He is preceded in death by his parents, Wayne and Doris Orndorff. Survived by his wife of 35 years, Janet Orndorff; brother, Neal Orndorff; sister, Becky (Rick) Gilleylen;... View Obituary & Service Information

The family of Bruce Edward Orndorff created this Life Tributes page to make it easy to share your memories.

Bruce Edward Orndorff Age 72 of Gallatin passed away on May 8,...

Send flowers to the Orndorff family.