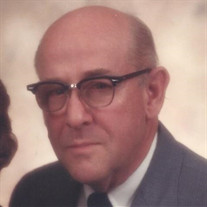 Billy Franklin Scudder, 89, of Nashville, TN, passed away February 12, 2020. Bill was born November 18, 1930, in Nashville, TN, to Ruth Irene Highsmith and William Howard Scudder, Sr. He is preceded in death by his parents; three brothers and two sisters; wife Joan Monroe Martin Scudder; and son, William Howard Scudder. Bill is survived by daughters Connie Scudder Powell (Bill), Dianne Scudder Dyce, and Amy Scudder Freeny (Jerry); grandchildren Rachel Freeny, Stephen Freeny, and Will Powell. Visitation with family will be Friday, Feb. 21, from 4-8 p.m. at Phillips-Robinson on Gallatin Road. An 11:00 a.m. memorial service will be held Feb. 22 at Nashville First Baptist Church, with visitation at 10:00. Burial will follow at Little Hope Cemetery, Clarksville, TN. In lieu of flowers, please consider a donation in memory of Bill F. Scudder to the Adult Choir Music Ministry of Nashville First Baptist Church (108 7th Ave S, Nashville, TN 37203), or the Vanderbilt Eye Institute (VanderbiltHealth.org/giving). Bill grew up in East Nashville, was a member of Grace Baptist Church, and attended Issac Litton High School where he was drum major of the Marching 100 band. After high school he served in the U.S. Air Force, then returned to civilian life where in 1952 he married his childhood friend, Joan Martin. For the next 55 years, they raised four children, and worked side by side in his vocation as a minister in several local Baptist churches, and later in their bookstore and printing business. Bill’s life was filled with many friends made along the way. His interest in people and their life journey drew folks to him, and his skill as a teacher and speaker earned him the respect of many. His start in the business world began at the Baptist Sunday School Board in 1951 where he worked as a printing-press operator and advanced his way to bookstore manager, all while attending Belmont College and working toward a religious studies degree. In 1961, Bill began a new journey. He took a succession of jobs that prepared him for his ultimate career. From serving as a sales rep with Cambridge University Press, to manager of the Tennessee Book Company library division, to minister of education at First Baptist Church Donelson, these jobs were the lead up to a final career change. In the early 70s, Bill opened Scudder’s Book Service in Madison, TN. For the next 25+ years, he specialized in selling Bibles, religious literature, music, Malmark Handbells, and wedding and social stationery. He also offered printing for local churches and small businesses. He probably could have hung out a shingle that read, “The Doctor Is In.” Friends, and customers who became friends, often dropped in to fellowship or discuss matters that were beyond the scope of everyday chit chat. Matters of the heart. Matters of faith and doubt and concern. Young people and old friends—they all sought out Bill’s advice or opinion. And he served them well. Bill retired and closed his book service in 2000. Many friends will remember his “Letters to a Private Church” that he sent them on special holidays. If you would like a PDF of the collection of letters, email Connie Powell ([email protected]).

The family of Billy Scudder created this Life Tributes page to make it easy to share your memories.

Send flowers to the Scudder family.