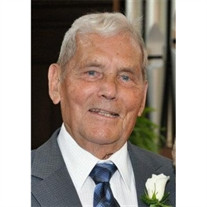 Billy Filmore Huffine, age 88, passed away September 8, 2015. Preceded in death by his parents, Oscar and Daisy Huffine, brothers Athel Huffine and Glen Huffine, sisters Dottie Mai (Graham) Huffine and Johnnie Pearl (Snow) Huffine. He was a retired Bird Colonel with the Tennessee Army National Guard serving as Personnel Officer for the State of Tennessee. When promoted to Lieutenant Colonel he became the youngest in the State of Tennessee. He was a veteran of the U.S. Navy serving in World War II. He was a longtime guardsman and retired from the National Guard in 1983 with 36 years of service. While in the guard he received numerous awards. He served as an aide to Governor Frank G. Clement and Governor Buford Ellington. During this time he had the opportunity to meet Presidents John F. Kennedy and Harry Truman. After retiring from the National Guard he began working for TEMA (Tennessee Emergency Management Agency), retiring from TEMA in 2007 with 24 years of service. He was a graduate of Dupont High School and MTSU. He was a member of Old Hickory Methodist Church and attended Two Rivers Baptist Church. He was a loving father and husband of 57 years., married to the former Miss Geraldine (Gerry) Johnson who survives. Other survivors include four sons, Billy F Huffine Jr. (Sheryl), Steven Lee Huffine (Pamela), Timothy Wayne Huffine (Kristi), and Robert Brian Huffine. His grandchildren had a special place in his life and heart. They are Andrew Timothy Huffine, Natalie Abigail Huffine, Stephanie Herndon (Roger), Steven Lee Huffine Jr., Dawn (Patrick) Steele, and Shannon Huffine. Great-grandchildren include Ruby Lynn Steele and Michael Roger Herndon. He always looked forward to spring when he could plant his large garden. It was a pleasure for him to share his abundance of vegetables with family and friends. He loved his three chow dogs. The third, "Max" a rescue flown from Texas, became an immediate friend to him. He especially enjoyed his early morning walks at Rivergate Mall with all his friends and walkers. He will be dearly missed by all who knew and loved him. Visitation will be at Phillips-Robinson Funeral Home Hadley Chapel Wednesday, September 9th from 4-7pm and Thursday, September 10th from 12pm until the time of service at 1pm. Interment will full Military Honors will follow at Hermitage Memorial Gardens. In lieu of flowers please make memorials to gideons.org/sendtheword

The family of Billy Filmore Huffine created this Life Tributes page to make it easy to share your memories.

Send flowers to the Huffine family.