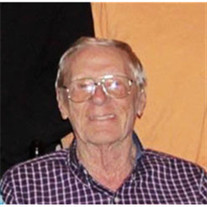 Billy Burgess, age 81, passed away January 8, 2017. He was a devoted husband, father, grandfather, and great-grandfather, a.k.a. "Paw Paw". Billy was honorably discharged from the US Army after 2 years of service. He was a member of the Edgefield... View Obituary & Service Information

The family of Billy Burgess created this Life Tributes page to make it easy to share your memories.

Send flowers to the Burgess family.