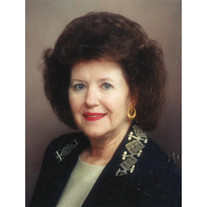 HOLLOWAY, Betty Hunter Age 86 formerly of Nashville, TN, but for the last 2 years was a resident of Carrick Glen Senior Living in Mount Juliet, TN, died after a brief illness at Summit Hospital in Hermitage, TN, on March 27th, 2018. Betty was born and raised in Nashville, TN, on November 24th, 1931. She moved to Hendersonville in 1968 and then back to Nashville in the mid-1980s. Betty graduated from Cumberland High School in Bordeaux, where she was active in many clubs and school activities. She played on the women’s basketball team and was voted “Best School Spirit’” “Most Popular”, and Homecoming Queen her senior year. When not in school she attended Youth Incorporated Camp in its’ early years and enjoyed going to movies and local “swimming holes.” After leaving high school Betty worked for several companies over the years, including the National Life and Accident Insurance Company and Globe Business Furniture. Later, she and husband, Roy, started and ran their home-based business, Holloway Equipment Company. Over the years Betty loved spending time fishing on her pontoon boat, attending Vanderbilt and Titans football games, meeting up with family for some fun in Tunica and socializing with friends at the Elk’s, Moose and VFW Clubs. She and Roy were longtime members of American Legion Post 82. Betty was loved by many for her eternally youthful spirit and wise-cracking sense of humor. She was so proud of the fact that her beloved poodle, Gator, was chosen to appear in a country music video with Pam Tillis some years ago that she created a fan club for him and pressured her friends to join, which generated many laughs. Betty is preceded in death by husband, Roy Wade Holloway, Sr.; son, Richard “Rick” Earl Hagey, Jr.; daughter, Patty Jane Hagey; mother, Nina B. Kinchum Hunter; father, James Franklin Hunter, brother, Robert Franklin Hunter; sister in law, Shirley Moore Hunter; and brother in law, Paul William Jackson. She is survived by sister, Nina Mildred “Mickey” (Stan) Hunter Krasnodebski; daughter, Diane Hagey Levine; son-in-law, Mark Harris Levine; step-daughter, Beth Holloway, step-son, Wade Holloway, 3 grandchildren, and numerous nieces and nephews. Visitation will be at Phillips-Robinson Funeral Home, 2707 Gallatin Rd. in Nashville, on Saturday, March 31 from 10am-12pm, service will be at 12pm in our chapel. Interment immediately following at Spring Hill Cemetery. Memorial donations may be made in lieu of flowers to The Pat Summitt Foundation @ www.patsummitt.org. PHILLIPS-ROBINSON FUNERAL HOME, (615)262-3312.

The family of Betty Hunter Holloway created this Life Tributes page to make it easy to share your memories.

Send flowers to the Holloway family.