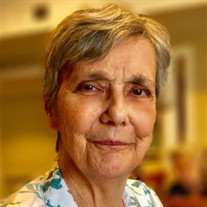 Barbara “Jane” Panter Vandercook (83) passed away peacefully on Saturday, September 21 at The Hearth Memory Care Center in Hendersonville, TN. She is survived by her son, Jack Vandercook, Jr. of Hendersonville, TN, her daughter, Kim Sonnen (Tom Sisung) of Denver, CO., her honorary daughter, Jammie Breedlove of Hendersonville, TN and a brother, Ronald Panter of Hendersonville, TN. She is preceded in death by her husband of 55 years, J.D. Vandercook. Vandercook was born on March 24, 1936, in Old Hickory, TN, to Clearance and Lena Panter of Old Hickory, TN. She graduated from DuPont High School in 1954 and Middle Tennessee State University in 1958. In college, she was a cheerleader and Vice-President of the Associated Student Body. After graduation, she spent the next 34 years as a high school teacher in the Metropolitan Nashville School System. She taught American Government, History and Civics for 26 years at Maplewood High School. She also served as the school’s athletic director, cheerleading sponsor, Honor Society, and Academic Olympics sponsor. In 1986, Vandercook transferred to the new Hunter’s Lane High School, where she taught U.S. History. Over the years, Vandercook received many honors including Metro Teacher of the Year and the Tennessee Council of Social Studies Outstanding Teacher award. She also authored two textbooks for Prentice Hall Publishing. However, the recognition she was most proud of came from past students and their stories. After retiring, Vandercook served as a volunteer and a volunteer board member at Skyline Medical Center. Visitation will be from 4-8 PM on Tuesday, September 24 at Phillips & Robinson Funeral Home Hadley Chapel, 1700 Hadley Ave. in Old Hickory, TN. A funeral is scheduled for 11AM, Wednesday, September 25 at the funeral home, followed by burial at Beech Presbyterian Cemetery (Hendersonville, TN). In lieu of flowers, please send donations to the American Alzheimer's Association.

The family of Barbara Jane Vandercook created this Life Tributes page to make it easy to share your memories.

Send flowers to the Vandercook family.