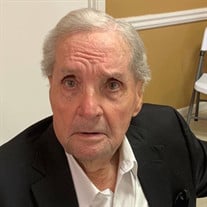 Alvin C. Williams lived in the Madison/Old Hickory Area most of his adult life. He was employed by Coggin Chevrolet in Madison and The DuPont Plant in Old Hickory. Being from rural Smith County, Tennessee, "A.C." as everyone called him, enjoyed his city farm in Neely's Bend which he purchased in 1950. He had cows, horses, chickens and even raised minks at one time on his farm. He enjoyed the Tennessee Walking Horse and owned several during his active farming days. He and his wife Opal enjoyed going to the Tennessee Walking Horse National Celebration each year. He was a member of The Masonic Lodge in Old Hickory and was an Al Menah Shriner most of his life. He was active in the Madison Civic Club as well. Most of all he was a good father to his only son, Ricky H. Williams. Alvin C. Williams was the son of Haskell and Naomi Smith Williams. There has been speculation he was named after Alvin C. York since his middle initial "C" never had a name attached to it. He had three siblings: Brothers, Ralph Williams and Harold Williams, and one sister, Billie Williams Sircey, all who have pre-deceased him. He is survived by his aunt, Virginia Bennett of Lancaster, Tennessee and nieces, Anna Wahl, Sandra Hollis, Teri Marty Pitts, Sherri Marty Perkins, Sandee Marty Jamison, Vickie Nicol, Connie Evans, Paulette Matteson and Nelda Dillard. He is also survived by his nephews, Ralph Williams Jr., Marc Williams, Zach Williams, Gary Dillard, Tim Dillard, Steve Marty, Phillip Marty, Jake "'Jakey " Scherer and Michael Counts; and his sister-in-law, Marzelle Scherer and her husband, Jake Scherer Sr.; and many, many other cousins and great nieces and nephews. He has one special survivor in "great-granddaughter", Sutton Montgomery Burney of Mt. Juliet, Tennessee. Pallbearers are Marc Williams, Zach Williams, Phillip Marty, Conrad Reding, Tyler Reding, Patrick Egan, Hunter Burney, and Leon Shields. It is fitting that the funeral for Alvin C. Willians is here in Old Hickory, Tennessee at Phillips-Robinson Funeral Home. The community of Old Hickory is a DuPont Company town. Named after President Andrew Jackson who was known to be as tough as an Old Hickory tree. Old Hickory sets between Madison, where Alvin Williams bought a farm in 1950, and where he lived his whole life up until 2017, and The Hermitage which is the home of President Andrew Jackson. The Old Hickory Country Club across the street from the funeral home was built by the DuPont Company as well. It is also fitting we are back in Old Hickory because that is where Alvin Williams met Opal Marty while both worked at the DuPont Plant here in Old Hickory. They were married and spent a total of 62 years together. Their first home was in the Rayon City, part of Old Hickory on Newell Street. Then in 1950, Alvin Williams bought a farm in the Neely's Bend Community of Madison, TN at an auction, unbeknownst to Opal that day. They continued to live there until May of 2017. Opal passed away a month later on June 27th of 2017. We thank you 🙏 for praying for the Williams Family at this time

Alvin C. Williams lived in the Madison/Old Hickory Area most of his adult life. He was employed by Coggin Chevrolet in Madison and The DuPont Plant in Old Hickory. Being from rural Smith County, Tennessee, "A.C." as everyone called him, enjoyed... View Obituary & Service Information

The family of Alvin C. Williams created this Life Tributes page to make it easy to share your memories.

Alvin C. Williams lived in the Madison/Old Hickory Area most...

Send flowers to the Williams family.